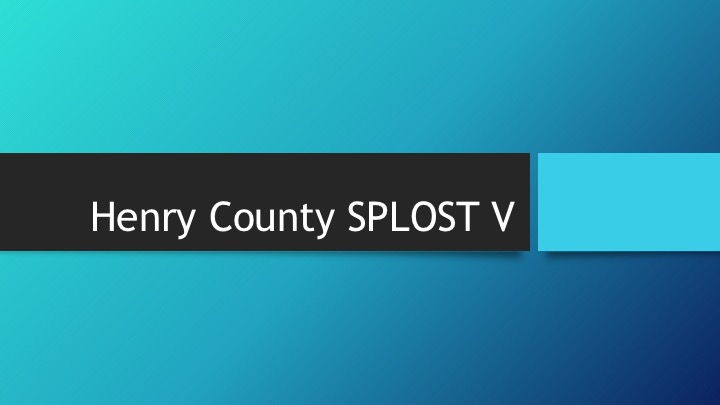 The Henry County SPLOST V committee will hold its final meeting of 2018 on Thursday. During the meeting, committee members will select countywide projects to be included within the proposed SPLOST V program. Please note that all committee recommendations are as an advisory function only until the project list is presented to and adopted by the BOC.

The committee will meet on Thursday, December 13, at 6:30 pm at the Henry County Administration Building located at 140 Henry Parkway, McDonough, GA. The meeting will be held in conference room B and is open to the public. An opportunity for public comment will be provided for those wishing to speak.

SPLOST stands for special purpose local options sales tax and is a program used by Georgia counties to fund capital improvements and transportation projects. SPLOST is governed by each county commission and a local referendum is held every six years to consider extending the local sales tax. Henry County SPLOST IV was approved by voters in 2013 and collections will end on March 31, 2020. If the SPLOST V referendum passes, collections will continue for an additional six years with no change to the existing sales tax rate.

The SPLOST V program is estimated to collect $220 million over the course of six years. For reference, the current program is on schedule to collect $190 million. 25% of the proceeds are divided among the cities based on population and the remaining 75% is managed by the Board of Commissioners. The Henry County BOC is anticipating $165 million in SPLOST V collections.

The largest request under consideration within SPLOST V countywide projects is a vehicle replacement plan for the county government. SPLOST funding has historically been used for public safety vehicles and DOT equipment; the request incorporates all other county departments. The county manager’s office has developed the plan working with county department heads and it requires approximately $3.78 million dollars in annual funding to implement. The request totals $22,695,000 over the six year collections period.

There are several county facilities under consideration. These include renovations at animal control, a new elections building, construction of an additional jail pod, probate court renovations, and expanding the Heritage Senior Center in McDonough. Others will be presented by the county manager and may be selected within the project list.

Additional funding for the I-75 exit at Bethlehem Road is a top priority. SPLOST V dollars will be used to secure state and federal funding towards the exit. Other transportation requests include funding a greenway trails master plan, installing smart traffic signals at interstate exits to improve public safety response times, and constructing the last segments of the McDonough Parkway.

The Kensley Grace foundation has requested $8 million in funding towards a future aquatics center. The committee will consider their proposal, quoted at $24 million in construction costs, but also is looking to partner with the school board on a possible smaller venue. A new park is under consideration in the Heron Bay / Luella community. The final projects in the discussion include a convention center and additional funds for the SCTC campus in McDonough.

The cost of program management will be included within the countywide projects. This line item costs $3.9 million in the current program.

Once the countywide projects are selected, the remaining funds will be divided among the commission districts. Each district received $20 million for projects in SPLOST IV. District projects may include park expansions, major transportation projects, intersection improvements, sidewalks, dirt road paving, bridge repairs, and road resurfacing. The committee will hold meetings in 2019, one within each district, to select these projects. All meetings are held on Thursday’s at 6:30 pm and venues are to be announced.

Residents are invited to any of the SPLOST V committee meetings to provide their input on possible projects. Comments may also be submitted via email at MovingHenryForward [at] gmail [dot] com.